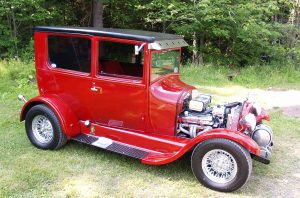 If you’ve broken your car keys or need them reprogrammed, who could blame you for thinking longingly of the days when cars didn’t need immobilisers and other electronic wizardry?

As a vehicle locksmith, I’m fascinated by the history of cars. So if you’re lamenting the loss of your car keys or complaining about having your transponder reprogrammed, spare a thought for the long suffering driver in the good old days.

Given the huge advances in technology, it’s hard to imagine that cars have only been around for a hundred years or so. Your parents or grandparents would probably have given their eye teeth for a car that started at the flick of a switch or turn of a key. If they were lucky enough to own a car, they were probably reliant on brute force and a cranking handle to start the darn thing.

Cranking handles weren’t just physically challenging, they were also dangerous, with sprained and broken wrists and thumbs being the most likely injury. When the engine started, the crank handle would kick back against the driver’s hand. An experienced motorist quickly found out that the handle had to be held correctly. If it was grasped with your thumb splayed on the opposite side of the handle to your fingers, you were asking for trouble!

Despite their risks, cranking handles remained in use for many years, and you might be surprised to hear they were still around in the 1980s or even 1990s as a back-up to the ignition system.

So what’s best – investing in a year’s gym membership to get in training to turn the crank handle (and pre-booking your seat in A&E) or a call to your local car locksmith? I know which I’d choose, but perhaps I’m biased!

Why OBD systems can be a double-edged sword

Let Me In Automotive Locksmith
5.0
Based on 58 reviews
powered by Facebook

Alan Kilham
2021-06-18T11:47:42+0000
Thank you for sorting my Ford Galaxy '66 plate today. Looking forward to worry-free motoring with the new key. Would... recommend to anybody who needs your services.read more

Pippa Arnott
2021-05-20T19:05:33+0000
Tjark is amazing. Nissan couldn’t fix my remote car key but Tjark did it in 5 minutes. He sorted out both of my keys... and saved me a fortune plus gave me some Very useful tips. Such a helpful and kind man. Thank you Tjark. Pippa xread more

George Hill
2021-05-06T13:03:40+0000
What a fantastic service. Great communications from the start. Very prompt arrival on site. New key supplied and... programmed for our charity minibus. Could not have been a better service from the start. Highly recommended.read more

Eric Robinson
2021-04-15T21:54:26+0000
brilliant service, knew exactly what was wrong with the car straight away and very quickly fixed it, would definitely... recommend.read more

Andy Betson
2021-03-08T20:53:49+0000
Every time I need a spare key cutting or coding LMI are the only ones I call. Friendly, helpful, seriously professional... - and I've always been more than happy with the price. Whenever I've recommended LMI to a friend or colleague I've given them a simple personal guarantee "If you're not happy with the service or product then tell me and I'll pay the invoice" Nobody has ever come back to me to ask for my money.read more

Greg Walker
2020-04-24T14:22:26+0000
Absolute brilliant service, was very helpful, and got my car central locking sorted in matter of no time. Could not... recommend highly enough. Thanks againread more

Claire Alonzo
2019-08-19T20:58:46+0000
I was visiting the UK to meet my first grandchild. Whilst there we had an incident where the car keys got locked in my... daughters car along with our newest family addition!!!. Tjark Andrews came out and unlocked the car quickly and without any damage. He would also not take any payment of any kind. Telling us he was on his way home!!. What a wonderful man with such a kind heart.read more

Holly Mills
2019-08-07T10:32:58+0000
Couldn’t fault LMI when I needed all my car locks changing. Tjark offered to come out the same day for a very... reasonable price beating other places by far. He was a lovely man who helped me out as well when I got worried about my insurance company too and what they wanted him to do. I was recommended him by 3 people and I will now also recommend LMI to others. Thank you again Tjark.read more

Helen Downham
2019-04-07T10:15:52+0000
Quick, honest, great prices and reliable. Everything you need from a Locksmith. My mum was visiting us and her bag was... stolen with her car and house keys in, Tjark was extremely helpful in telling us the best and cheapest way to get new keys and get her home again. It was much appreciated, thanks again.read more

Rob Jackson
2018-10-27T12:01:16+0000
Life saver!!!! A week in a new house, bottles of beer and no bottle opener, then, found my LMI bottle opener key... ring!! Can also highly recommend for anything vehicle related as wellread more
Next Reviews